Here's an interesting combo, a White- tailed eagle (Haliaeetus albicilla) and Dan Dare of Eagle comic fame. The stamp  is from the 10v  set of 2007  UK Endangered Birds. The white-tailed eagle  went extinct in the UK during the early 20th century, due to illegal killing, and the present population of 30 pairs has been reintroduced. 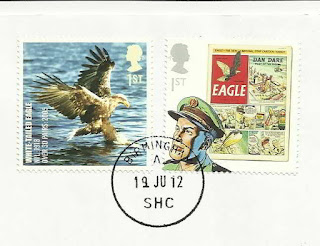 Eagle Comics were first produced in the UK in 1950.
Posted by VeraBird at 04:30 No comments:

To commemorate the opening of the fabulous Gardens by the Bay in Singapore, 2x $1.10 stamps with the upper one on this registered cover featuring a White-collared kingfisher.
Posted by VeraBird at 23:55 No comments: 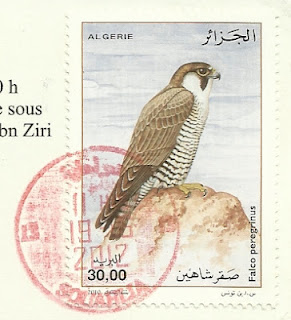 From Algeria, a Peregrine Falcon  (Falco peregrinus) with a clear postmark form Tlemcen, Souahalia.
The stamp is from the 3v of raptors set issued in 2010
Posted by VeraBird at 23:43 No comments: 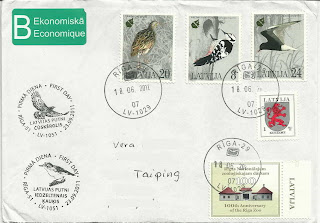 A nice cover from an exchange I did during June 2012, with a stamp friend in Latvia. Cancelled in Riga, the stamps  were issued in 1995 for the European nature conservation year. The birds: 20s Corn Crake (Crex crex), 8s White backed woodpecker (Dendrocopus leucotos) and 24 s White-winged tern (Chlidonias leucopterus).
The cover also has a pictorial cancels of  birds which featured on 2011 stamps, the Icterine warbler (Hippolais icterina)  & a  Short-toed Snake Eagle  (Circaetus gallicus )

Received this nice postcard  from Mr Khor who used definitive stamps of the Spotted dove which  were cancelled in Kuah town Langkawi island.